In memory of Susan Tucker

Hello and Goodbye to my family and friends.

Yes, this is my obituary, self-penned. And yes, it is on social media because who is buying newspapers these days? Damn you, Zuckerburg.

I know a lot of you are probably wondering if you read that right.  I expected that.  And I was prepared and excited to share with you why writing my own obituary was important to me and truly made me happy.

When I found my way to the Mayo Clinic five years ago and was told I had a life expectancy of 2-5 years, I started looking at life & death in a whole new way.  After spending some time searching for clarity and confirming that there was no chance for a cure, I began settling into the idea that I needed to wrap things up here.  I knew I didn’t want to die in the old ‘traditional’ way.  So I let thoughts roll around, collecting them.  Then I started taking notes.

I never understood the rituals of death.

A priest (or some other type of spiritual leader) is handed a page of words about someone he or she likely doesn’t know well, if at all, and reads it as if that is all this person ever was.  Black and white words, a few adjectives, and a list of relatives.  I felt like there was something truer and more meaningful, at least for me.  I’m not bashing funerals, I’m just wondering if maybe it’s time to “update” some of the rituals we’ve used for hundreds of years.

For myself, when I’d see that a friend or acquaintance had passed, I’d take some time to remember something that we shared together.  And then my mind would wonder, “But what happened to them?”  Tell me, is the dying process supposed to be a secret? It’s so rarely mentioned.  So, pardon me, but I’ve decided to break that rule and shine the light on my death.

I died from Parkinson's Disease and Interstitial Lung Disease.

I give equal credit to both.

I’ve always imagined how cool it would be to hear from the person whose funeral I’m attending, and ask them about the last part of their life.  No doubt, they would have some interesting bits of knowledge that we’d benefit from.  But would we be willing to listen?  Like, REALLY listen?  I promised myself that I was going to follow that curiosity and turn it into my reality.

I didn’t want to be afraid of talking about what I was going through, no matter how uncomfortable it was for some at first.  I encouraged the people around me to ask questions because, you know me, I love a good discussion!!  By shining a light on the dark and scary, beautiful things happened in my final months.  By running TO it instead of away from it, we opened ourselves to a deeper and truer connection than ever before.  Over the last 3-4 months, I’ve had over 40 visits with family and friends, a lot of them coming from all over the country, just to sit with me - talking, crying, and laughing a whole lot.  I couldn’t believe it and I have a hard time expressing just how special these times were for me.

I got to say goodbye. I got an end with an ending.

But before the end, I sure did have a great time getting there.

I was born in 1952 and raised in a little Texas town, known to all as Houston.  The oldest child of Harold and Marlene, my dad taught my sisters and I the importance of having fun in life, caring less about what other people thought and always offering a good handshake.  My mother showed us the power of charisma.  It’s a gift and if you’ve got it, you use it.   I got married in the early 70s and my daughter Tracy was born in 1974.  She has been my heart ever since.  After my divorce, I met my lifelong partner and wife, Kim.  We were officially married soon after President Obama announced the Supreme Court decision in 2013.  She has been my song for over 42 years now.

Kim, Tracy, and I moved to Nashville in 1989, where we eventually opened Kim Copeland Productions and Sage House Music.  We had both an office and a studio located on Music Row, and I loved having someone beside me to dream big and work hard with.  I have always believed in the power of a song.  I believed in it so much that I wrote 2 books, interviewing the hit songwriters behind some of my favorite tunes.  Kim and I were fortunate to record music for so many wonderful artists and writers, becoming as close as family with a few of them.  We called Kingston Springs, TN home until my health began to take it’s turn for the worst in 2020.  All the memories we made on Mt. Pleasant Rd were such a special part of my life, but I knew it was time to be closer to family.  So we moved back to the north Texas area for the “grand finale”.

I’ve enjoyed the opportunity to live my death backwards. We see it in movies  - coming back as a ghost and attending his/her own funeral.  I think what I went through in this final year is about as close as we can truly get to that.  Having this time with the knowledge of a pretty close approximation of when I needed to have my obituary finished was a huge blessing for me.

There won’t be a funeral, so there is no place to send flowers.  Instead think about this - what if every dollar you might be inclined to spend on flowers or cards for my non-funeral, add 10% and send it to medical research.  The typical price of card at Target is $5, flowers anywhere from $25 to $100…and for what?  I’m dead, I can’t enjoy them.  The way I see it is that if you’re gonna spend it anyway, why not spend it helping to find a cure for Parkinson’s rather than pretty condolences? Then start to focus on the next disease.  Cure cancer by 2030?  Could happen.

I can’t tell you how everything will have been the moment I passed, but I do know that I left this world feeling LOVED.  Who could ask for more than that?  Shine the light and see it all because the beauty is there if you’re willing to look.

My sisters, Debbie and Melanie

My nieces, Mariel and Morgan

My daughter from another mother, Rachel/Raye/R. Dub

A Celebration of Life is being planned for late April in Nashville.  Details coming soon. 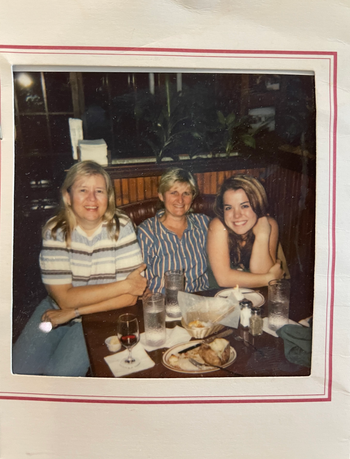 18 year old me being introduced to their favorite restaurant, Demo's in downtown Nashville 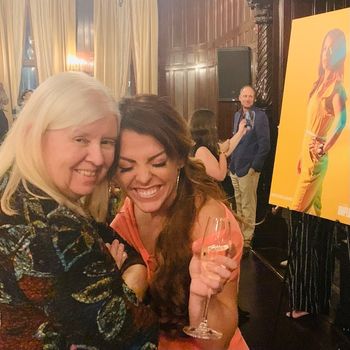 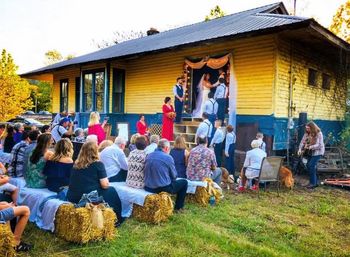 I chose to get married in Kingston Springs, TN because the thought of Susan not being well enough to make the trek up to Michigan for our wedding was unfathomable. So I brought the wedding to her. Best decision ever. 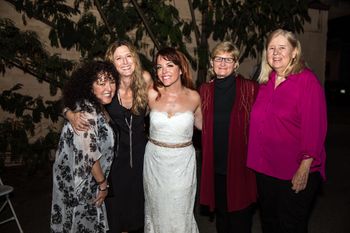 The sweaty bride surrounded by the best mentors in the world 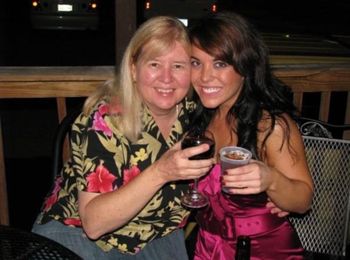 My 22nd birthday party on the patio of Loser's, complete with a Hannah Montana birthday cake 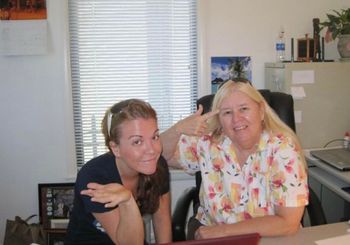 This perfectly captures our dynamic, ha! Talkin business in her office on Music Row 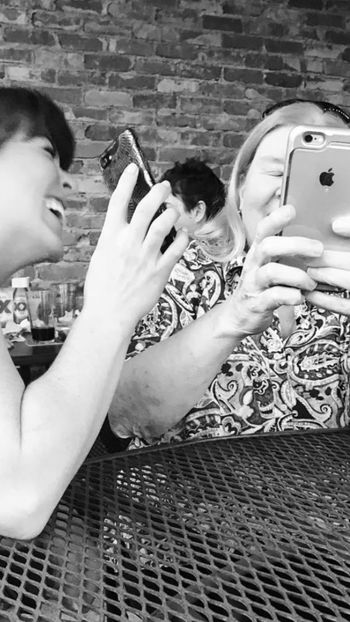 Kim captured the moment and I remember it perfectly out on the patio of The Fillin Station.

Everyone she introduced me to, including her hair stylists, became like family to me. 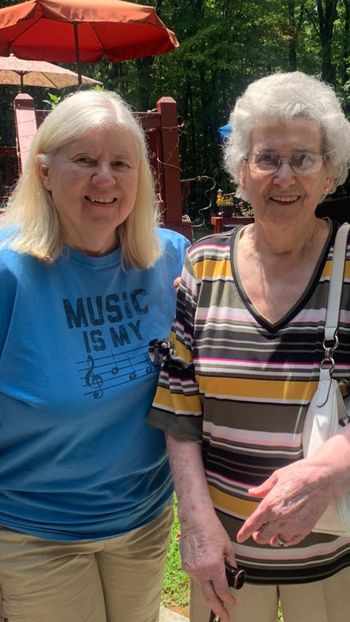 Susan with my Granny - best photo ever. 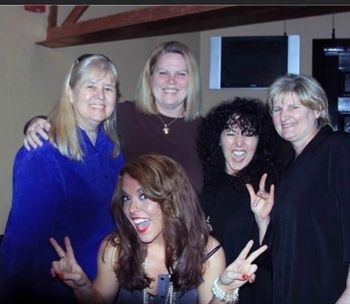 In the green room before my industry showcase at 12th & Porter 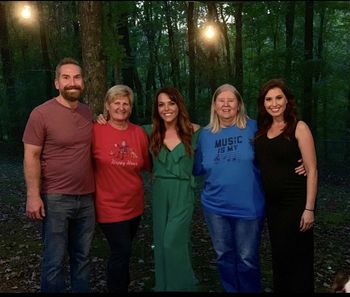 The hosted a 'bridal bonfire' party for me in their backyard (much love to my girl, Rachel for helping make it happen!) 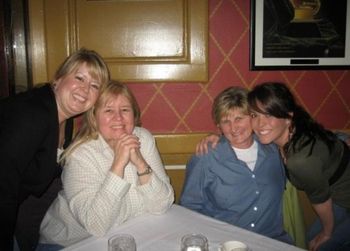 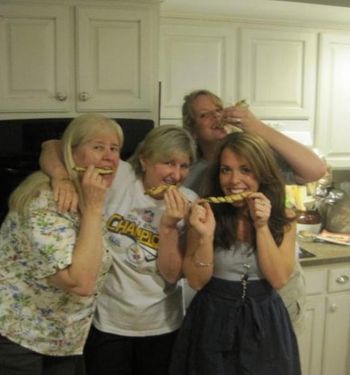 Sue's house parties were the best! 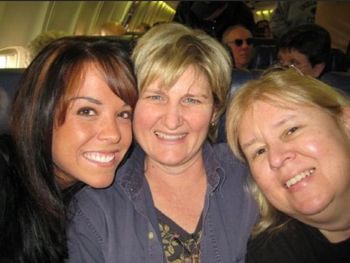 On the plane for my first trip to Vegas